The day I found out anger and anxiety are super-linked

Feel like you are always angry and irritable, my Butterfly? I’ve got some tips for overcoming resentment and things to do when you’re feeling angry and anxious.

Watch the video to learn about healing stress, anger and anxiety in women, or read the blog below:

Today I want to talk to you about anger, specifically, anger in women and even more specifically, how, as a woman, your anger blocks are contributing to your anxiety blocks.

This is a lesson that I myself have learned quite deeply this year.

It was only this year that I actually came to realize that I do have some anger and some resentment that I have collected over the years from witnessing and being part of injustices throughout my life and nothing sort of out of the ordinary, just sort of stuff that women do generally deal with in this day and age.

I am an energy healer as you know but I’m also a wife and a mother and a daughter and a sister and I hold many roles in my life and I also shoulder a lot of responsibility and I’ve also been pushed to the side a lot throughout my life.

Now, previously, before really stepping into my power and taking my seat on the throne of my life and fully taking responsibility for everything that happens, I would find myself very much being a victim of circumstance and just when you would think that more shit couldn’t happen, more shit would happen.

So it always seemed like just when I though people couldn’t disappoint me any further, boom.  Next low.

it was almost like people were trying to beat their score in terms of how low they could go with how they were treating me.

And so, I was feeling this simmering energy within myself.

It felt negative, it felt swirling.

Sometimes, it felt heavy, it contributed to indigestion.

And sometimes I’d feel it in my throat chakra to the point where I actually would feel a lump in my throat but I still didn’t have a name for it.

I didn’t know what it was that I was experiencing, I just felt blocked by this deep negative energy and it was making me anxious.

And I did feel blocked and I did feel that this negative energy was preventing me from getting my message out there into the world.

So, this happened this year: I get counselling for various issues that I have, I’m not ashamed to admit that at all.

We all have our stuff.

So I was sitting in the counsellor’s office and I was talking about a situation and she was listening and had the concerned look on her face and then she stopped and she paused and she said:

“Now, obviously, Eva, this is making you very angry.”

And my response was like I sort of sat back in my chair and I said to her, “Really?  Really?

I had always been taught that anger was like rage, anger was losing your shit, anger was throwing stuff around the room, anger was breaking stuff, anger was blind rage, it was making you do things that you didn’t want to do because you felt crazy and out of control.

But in fact, what I was feeling was this bubbling, simmering, suppressed kind of energy and so I was really actually quite surprised and shocked that this is what anger was.

And working through it, I came to realize that I had always repressed and held down my angry energy because I had always been taught that nice girls don’t get angry.

But we do.  We’re humans and we feel our emotions and we witness injustice and we see things that happen and we’re told that we can’t do anything about it and so, the anger just builds and builds and many people are just like me that don’t have a name for it either. Speaking to friends, I was saying to them, “Did you know that I am actually angry?”

And they said, “Oh, no, you’re not an angry person. You’re the energy healer.  You’re full of peace and light, you’re not angry.”

And when I had to break the news to them and say, “Yeah, well, actually, I am angry.

There’s been shit that’s happened to me over the course of my life and yeah, I’m angry about it and I’ll own that and I’m responsible for it.

“I’m responsible for my anger.”

But it came as a shock to many of the people that I know and love, that I had this resentment, this anger building up in me.

We’ve been living away from my heart-hometown for the last four years and everything been directed towards my husband finishing his degree.

And I’d said to him, you know, “When you finish your degree, you’re going to fall sick.”

Thinking he was holding it all together and when it all came to the end, he was going to crumble.

Well. It actually wasn’t him that fell sick, it was me.

And I woke up a week ago with my eye, my right eye was huge and swollen and even now both my my eyes are red and bloodshot.

And the reason for that was I was holding on to all this resentment and tension of coming second, everything coming second, my role as a wife and a mother and needing to step up into those roles to support my husband while he was doing his degree.

I could totally get that, I totally understand that and yes, absolutely reasonable to be doing that.

So I get that but I’m still entitled to feel a little bit pushed aside, a little bit like I came second for a long time, that I lost my husband to his study for a good while.

And all of this resentment and tension suddenly found a way to bubble up and I had a massive, massive swollen eye and it turned out to be viral conjunctivitis.

So, I knew when I got up in the morning and I looked in the mirror and I could see myself, I thought, “There’s my anger and resentment and tension right there, plain as plain on my face.”

So, that’s an example anger has manifested physically for me and it’s manifested directly and recently and it’s very real for me.

So, I got to work and I decided to put together a meditation. Really, it was for my own use but I thought:

“If this helps me, then it’s definitely going to help my Butterflies out there with their own anger connected anxiety blocks.”

So, in this meditation, I basically set a commitment, an intention that I’m going to work on and take responsibility and own and heal my energy blocks.

So, I’ll put the link under this video but I just want to go into the actual steps that you need to take when you want to heal your anger blocks and the steps are the same steps that you use basically to heal any type of anxiety related energy block. And the first step is to…name it.

You need to understand what it is that you’re feeling.

So, for me, I didn’t have a name for this bubbling, simmering, negative, suppressive, rising energy that was inside of me that was just simmering and bubbling along.

I had no name for it.

I had to get a name for it out of a counselling session and the minute the counselor said to me, “Obviously, you’re anger,” suddenly, I had a name for it.

I don’t think I’d had such an a-ha moment since I was actually diagnosed with anxiety disorder about 20 years ago.

So, finally having a name for it was so empowering for me.

It was shocking, it was surprising, I think, because there’s so much bad press about anger.

I was a little surprised and felt a little bit bewildered by, “Oh, my gosh, is this what I’m feeling?  Is this anger? Oh, my goodness…”

But once I got over that and I thought, “Yeah, no, actually, that’s what this is called.  The name for this emotion is anger. So I named it.  That was a huge shift for me, a huge a-ha moment.

The second thing I needed to do was accept it.

I had to accept the anger.

I had to accept the angry energy.

Now, let me just explain to you a little bit about my own acceptance process once the counselor had told me that I was experiencing anxiety.

Everything around me was just swirling and I couldn’t actually get my bearings.

So, I called my husband on the phone and I said, “I’m angry.  Did you know what I’m angry?”

And he said to me, “Uh, I wouldn’t put it that way but yes, I think, maybe perhaps…uhmm…yeah, maybe.”

So, I was just sitting in the car and I thought I’ve got no other option but to just sit here and let things swirl around me for a while before I even attempt to drive.

So, I sat there in my car for at least an hour.

And I had another hour that I had to drive to get to my brother’s house after this counseling appointment but I was sitting there and I just had to accept that fact that I was angry.

That really helped to still and stabilize me in my parasympathetic nervous system.

But it also allowed me a bit of space just to accept that I finally had a name for these feelings that I had been pushing down but that I didn’t realize that I was pushing down and that basically, I was in a lot of denial about.

So, accepting it, that was a huge step.

And that was something that I really had to allow to happen.

I had to again accept that I didn’t have a lot of control over what was going on in that moment. 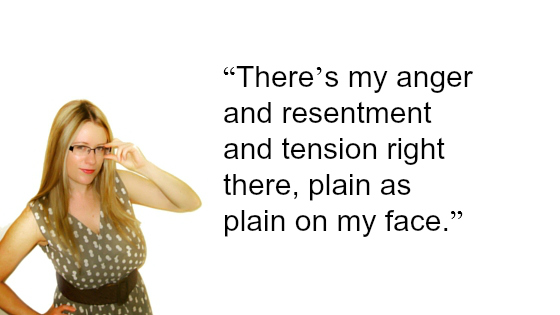 So the next step…relax into that feeling.

So, it sounds like the absolute opposite of what you want to do.

That’s why you have an anxiety disorder.

It’s because you’re resisting it like, “Here’s the bad feeling… I’ve got to hold on!” and you tense up and you resist it, you know – you want to push back and you want to fight it and people always tell you, “You’ve got to fight it.”

Well, I’m here to tell you, fighting it will get you nowhere.

Fighting it will just feed that anger and that negativity and that resentment.

It will absolutely get you nowhere.

You have to fully, after accepting it, relax into it.

And it is totally counter-intuitive but believe me, this works.

Just relax into it, build some space around it if you can.

And I’ve got another meditation that will allow you to build some space around it but just for the moment, stay with me.

You just have to keep on relaxing into it and as you come across more blocks related to it, you got to relax into those blocks as well.

You just have to keep on accepting it and allowing it and building space around it and not fighting it anymore.

Work with me and heal your anxiety! Click here to find out more.

Free anxiety energy healing meditations on MP3. Get them here.