How to be more emotionally resilient when you have social anxiety

Why are some people more resilient than others, my Butterfly? What makes people resilient in the first place? Can resilience be learned? I reveal the answer in this blog post.

Watch the video to learn more about how to be more emotionally resilient, or read the blog below:

Can resilience be learned?

I’m talking about resilience and whether that is something that you can learn. Now, resilience is a word that’s bandied about the place by psychologists and people in the mental health game.

What resilience means is: The ability to bounce back from adversity.

What does that mean?

Basically, in life, shit happens to everyone.

Resilience is basically your ability to bounce back when bad stuff happens in your life.

How this became a psychological and medical term, I’m not sure.

All I know is:

I have seen a gradual increase in the way that the term resilience is used, not only in how it’s used to describe someone but it’s also kind of used as a tool of measurement when people are trying to talk about a person’s ability.

Now, let me give you an example.

When my anxiety was at its worst, I spent a lot of time in doctors; offices trying to get answers about what was wrong with me and why I was feeling the way that I was feeling.

When you’re experiencing anxiety and social anxiety, you want to feel better as quickly and as soon as possible and you’re going to do whatever it takes to get there.

And when I was diagnosed with anxiety, I was told that part of my treatment was cognitive behavioural therapy with an emphasis on building my resilience.

And I remember two doctors talking to one another about the appropriate treatment plan for me and they’re kind of talking about me like I wasn’t even in the room.

And I remember distinctly this female doctor saying, “Yes but she’s not coping with her everyday life.

She needs to develop some tools and some skills of resilience.”

And I was sitting there in this office thinking:

And number 2, I’m coping with life.

Hello, I got myself to the doctors, didn’t I?

I’m coping enough to say, I have a problem.  I need help solving my problem.

So don’t tell me I’m not coping with anxiety in my life.

So, they were talking as if my failing was my inability to cope with life and that the tool that was going to make me better – fix me up – was this magical resilience that I was going to learn (which is, as we said, the ability to bounce back when shit happens in your life.)

So let’s talk about that for what it really is.

And let’s get resilience down off its pedestal because it’s not a state that you should “strive” to be achieving. 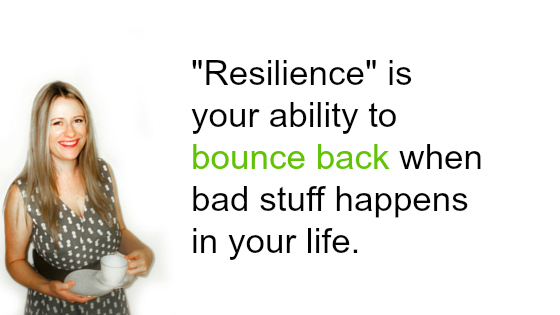 Resilience is one of the things that you can fall back on (and every human does actually have this innate ability inside themselves.)

It’s not really about BUILDING your resilience.

Because let’s be real:  The reason why you probably haven’t displayed resilience in the past is because shit has happened to you in life which hasn’t been your fault.

They’ve been given to you by the people that you know and trust most in your life.

So your friends, your loved ones, parents, your partner, work colleagues, the people that you hang out with the most.

They are the ones that you learn your tools and your coping strategies for life.

So, let’s get resilience down off its pedestal – it’s so important but it’s something that really needs to be uncovered for you.

It needs to be liberated FOR YOU so that you can go forth – not using a suite of tools that some psychologist has taught you in an effort to try to stop reacting like you have in the past to try and sort of become less of yourself – it’s about becoming more of yourself.

I’ll say that again: Resilience is about becoming MORE of yourself.

It’s about liberating you, freeing you, so that when shit happens in your life, you can say, “Well, it’s happened but that’s not me.”

It’s about having your eye on the bigger picture and it’s about maintaining your focus on that big picture.

Why are some people more resilient than others?

Resilience is an energetic thing and it is something that we’re all born with.

So this whole myth that you have to develop resilience…it’s something that I would just want to blow right out of the water.

Life teaches to become a victim so it teaches you to hold on to the past when bad things have happened to you.

That is natural, that is a defense mechanism whenever something bad happens to you, of course, it’s your natural reaction to not want to go through the same thing again because you’ve learnt that experiencing something bad is a danger.

Resilience is the ability to take a step back when stuff has happened to you and say, “That was unfortunate, that’s not something that I want to repeat again so I’m learning my lessons from this event. And I’m going to keep working towards the bigger picture.”

It doesn’t mean that you can’t have bad days.

It doesn’t mean that you can’t have bad moods.

You can still have all of that and still be a completely resilient person who is acing it at life despite what you might think.

You are absolutely doing wonders in managing anxiety – which is a condition that affects a good 40 million Americans – not to mention all the other people in the world that are silently struggling and who might be watching videos exactly like this one in an attempt to try and rescue yourself from the situation that you’re currently finding yourself in, searching for answers.

I had to sit in doctor’s surgeries and be told that I wasn’t resilient, that I wasn’t coping, that I had deficiencies in how I was approaching and handling life and it wasn’t until I decided – that’s a big, important point – I decided that I was going to become more of me, not less of me in order to manage life better looking at a bigger picture. How to be more emotionally resilient

Resilience as a 36-year old woman, might be how you manage a husband who’s in the military, two young children and the school and daycare balance, having a job, running a part-time business.

And I’m the first to say that being resilient isn’t something that’s easy.

It is a mindset shift, definitely.

And there are certain things that you want to guard against.

So you want to guard against getting caught up in negative thoughts when they hit you.

And I see this in people all the time.

They might be going along in life as usual, business as usual, walking on and something bad happens.

And suddenly, their entire day is ruined.

And they say, “Oh yes, you know, it’s just my luck that this bad thing would happen, that I’d prang my car when I’m dropping my kid off at school.”

But it’s how you approach that.

I mean, pranging a car is bad, let’s face it.

But this is about shit happening and rolling on, regardless.

It’s about whether you take that incident and you add that to your idea of who you are and how you experience the world.

So you have the choice – whether you say “Hi, I’m Eva and bad shit happens to me all the time.”

Or whether you consciously say, “Oh, that prang happened. That was a really bad thing that happened and my insurance premium is going to go up because of that and it’s just really bad and it’s probably wrecked my day.  But you know what?  It’s not going to wreck my week and thankfully, no one was hurt in that crash.  And thankfully, everyone is insured and everyone is okay and I had some scratches on my car that I needed to get fixed anyway so maybe insurance will cover that as well.”

It’s about looking for the light in the situation that you’re in, not necessarily being one of those positivity zombies that get around the place that “always look on the bright side of everything,” it’s not about that at all.

But it’s about letting the incident be what it is without engaging with it too much, without giving it any more energy than the incident deserves.

So I just want you to try this little energy healing technique:

In your mind’s eye now, hold the picture of yourself feeling happy and light-filled and just content in the present.

Just being content in the present where you are.

So you’re in a bubble, that’s all the reality you know in this picture.

It’s this bubble of white light and contentment, nothing else matters.

So, just sit there in that bubble and feel that pure contentment just inside that bubble.

And open your eyes and then where you are now is just the energy that you need to circulate in order to get to that overall picture of contentment. Life is full of ups and downs, it’s full of good and bad for everyone.

It doesn’t matter who you are.

But it’s about maintaining that bigger picture of who you are and where you want to be and not allowing little shitty events that go on to rule you and to wreck the life that you have.

And you might be going to the lowest of the low right now.

If you’re not there yet, keep circulating the energy.

PS: If you’re wanting more resilience, you need to be downloading my free White light protection meditation.  In under 4 minutes, you will go from feeling scared and vulnerable to safe and calm.