How to stop blushing in 3 easy steps 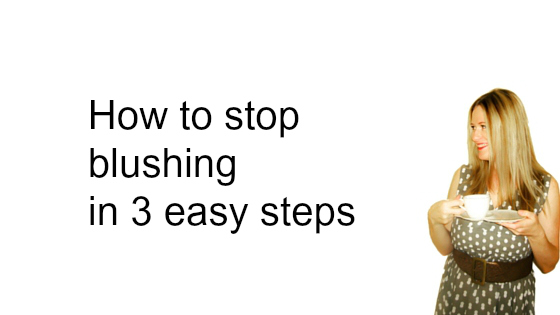 Wanting to learn how to stop blushing is natural, my Butterfly.

Especially if your blushing is out of control.

Many, many people with social anxiety all over the world feel that their blushing is out of control, so you’re not alone.

There are worse things you could be doing, than blushing, my Butterfly.

Blushing is actually a very friendly and attractive signal.

It is in no way offensive and it signals that you are vulnerable.

Yesterday I wrote about why humans blush, and why it’s not such a bad thing.

But yes – if you blush excessively, then learning how to get it under control would be a very empowering skill for you.

But I just want you to know one thing before I begin:

Nobody notices your blushing more than you do.

You may feel that everyone sees it, and that it makes you look stupid – but they don’t.

Even if somebody comments on it – they are only pointing out that you are feeling raw and honest.

And rawness and honesty are attractive traits in humans.

So here is Eva, she will explain the process she used to stop blushing:

So in my teens, I started in the habit of blushing.

It happened every time I felt that attention was placed on me, and it was often embarrassing because I felt I was giving the wrong message.

People were beginning to notice, and beginning to say stuff – pointing out when I was going red, as if that was some sort of proof that they had revealed the truth in me.

For example – there was a guy in school that everyone thought I had a crush on. I didn’t – seriously, I didn’t.

But every time someone would suggest it, I would blush.

Madly. I would go tomato-red with embarrassment.

And of course, people would point out my blushing, and this was seen as ‘proof’ that I liked this guy.

I also had a casual job working in a fast-food restaurant.

Every time I needed to actually engage with a customer – (say, if they ordered something that was a special order, or had any questions about the food) – my face would give me a way.

I felt out of control, like the inner most depths of my soul were exposed for a stranger to see.

I decided I’d had enough of it, and that I was going to get my blushing under control once and for all.

How to stop blushing

The decision to stop was probably the most important thing.

I was only a teenager at the time, but nonetheless my firmness and discipline in my thinking was already present.

I remember thinking “I am going to get this blushing under control. I’m not sure how, but I’m going to do it.”

That determination was the most important thing, I believe.

It put me in the mindset of – instead of running away, I was going to face up and fight.

I looked forward to the next time my blushing would be triggered, because I knew that it would be an opportunity to learn.

I guess I felt resourceful about the discomfort, because I knew it would lead to a new skill for myself.

So, the next time the guy (the guy everyone thought I had a crush on, but I didn’t) spoke to me, this is what I did:

I felt my cheeks burn.

I acknowledged, in my mind, that I was blushing.

But I firmly said to myself: “No. Blushing will not take over here. This conversation is more important
than my blushing cheeks”

And I turned the whole of my attention over to what he was saying.

I allowed my blushing face to be present, and I got on with life.

I didn’t waste my energy trying to fight it.

I simply rested my focus and intention on the more important thing at hand.

Listening to other people.

Talking to other people.

Engaging with the world around me.

Even if someone pointed out my blushing cheeks (and they did, with irritating regularity), I would simply say:

It did take some time.

But slowly and surely, I stopped blushing so crazily at the slightest provocation.

And I believe my success was due to these three steps:

1. DECIDING that I would overcome my blushing habit

2. Diverting my focus away from my blushing, to the most important task at hand

3. Accepting things as they were in the moment and allowing time to pass (I knew that my blushing would stop eventually)

It worked for me.

PS – You will get an extra boost by listening to my free White light protection meditation. It will help you feel calmer, less vulnerable and better able to control your blushing.