Recovering from gaslighting abuse: How it impacts social anxiety

Many of my energy healing clients are healing from the effects of gaslighting abuse. Here’s how I personally experienced this crazy-making manipulation tactic.

Watch the video to learn more about what is gaslighting and what you can do about it, or read the blog below:

Gaslighting is a tactic that’s used by toxic people to make you feel like you’re going crazy.

So, a good way to explain it is if you’ve ever read the Roald Dahl book, The Twits, it’s about this horrible couple called Mr. and Mrs. Twit and they hate each other.

They’re a man and a woman, they’re married, they despise one another and they do everything that they can to make each other feel like they’re unworthy, they’re unloved and one of the things that Mr. Twit does to Mrs. Twit is he glues little piece to the end of her walking stick to make her feel like she’s shrinking.

The other big way that narcissistic abusers gaslight you – they manipulate your memories.

So, you might say, “Remember a couple of weeks ago when you said this?”

And they’ll turn around they’ll say, “What do you mean?  That didn’t happen.  That never happened.”

Absolute denial of the fact that something that you have in your memory happened.

Now, what does this have to do with anxiety, I hear you say.

SO MANY of my clients who have come to me for energy healing have been the victims of this type of abuse.

It is one of the worst tools of energetic warfare.

It makes you question everything.

It makes you question who you are, where you are and what reality you’re living in.

And you might even be at the stage where you’re severely doubting your sense of self and your ability to make connections to draw reasonable conclusions.

And that can have a huge impact on your energetic boundaries, can make you completely lose your sense of self and can leave you second guessing everything. 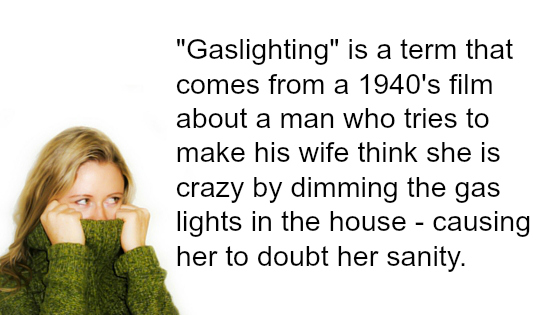 Examples gaslighting abuse in my own life:

So, I just want to give you some example where I personally have experienced gaslighting in my life:

So, the first time that I found that I was subjected to gaslighting was in my first job after I completed my university degree.

I was working for a company in Sydney and my boss wasn’t much older than me.

Every day, I would go into work and I would get a different version of my boss’s personality just depending on what mood she was in.

Some days, I’d arrive at work and she’d be friendly and she’d be saying hello and she’d be interested in me and my life and say stuff like, “how was your evening?”

And then other times, I would walk into the office and she wouldn’t even acknowledge my presence.

And I noticed in her emails there was an acceleration in her behavior where she was taking credit for work that *I* had done and she was also blaming me when things has gone wrong – and this was when things were directly not my fault.

There were times that stuff had happened and I was at fault and I was more than willing and able to take responsibility for things that I was responsible for but there were times when out and out, she was just simply passing the buck and blaming me which is not an appropriate behavior for a manager to have.

So, I confronted her about it.

I took her into a meeting room and I showed her example of the emails and I said to her, “I won’t have this.  It’s not on. I can see what you’re doing.  You’re trying to damage my credibility by blaming me for things when they go wrong and you’re also taking credit for my work.”

And her response to me was, “I don’t see any of that.  That’s simply not happening, you’re reading this wrong.  You’re interpreting this wrong.”

So there I was, as a 21-year old, sitting there, my first job out of university, listening to this person who was supposed to guide and mentor and manage me in the workplace telling me that I was perceiving and interpreting this situation incorrectly was hugely eye-opening for me at the time and it absolutely shifted my confidence.

My feelings of, “I know what’s going on here…”

And I really did question, “Oh, am I overreacting here?  Is this something that’s actually quite acceptable that I’m taking offense to?”

And I can sit here and I can laugh in hindsight because I know that what was happening was absolutely unacceptable.

She was behaving in a way that was completely unprofessional and immature as well.

It’s something that, at the time, I took on board as completely my fault.

So, I then took on that energy and from then on, I took that behavior as being something that was quite acceptable and quite okay. She was having multiple tantrums a day.

She had our manager bullied to the point where my manager felt she couldn’t manage her and we were all under the rule of this particular woman at work.

That was the crazy thing.

And I saw that everyone was putting up with it and I put up with it to a point until I actually found, I was going home after work and I actually entertained for the first time and the last time in my life, suicidal thoughts.

So, again, I decided to talk to her about the behavior.

I took her into a meeting room and I said, “Look, what’s been happening in the workplace here where no one else is allowed to critique your work.”

This was work that was being published in a newspaper so it was pretty important that it was correct.

“No one is allowed to critique or edit your work.

Our manager can’t make decisions because she’s fearful of your manner and how you will react.

So I brought all of this up it the meeting.

And she reacted by saying, “Well, I’m going to tell you how I feel about you.  I feel that you are haughty, abrupt and rude.”

She continued, “And I feel like you don’t make me feel welcome in the workplace.”

So by doing that, she absolutely minimized what I said, she gave it absolutely no credence whatsoever.

She actually didn’t even address what I said at all and what she did was she threw a whole bunch of accusations at me which I then felt completely blind sighted by.

I actually ended up in that meeting apologizing profusely to her for making her feel that way.

Why would someone make up stuff like that after I had just told her how I was feeling?

How could she then not tell me how she was feeling?

And you know what?

That may have been the way that she was feeling because to be honest with you, in my personal experience in the experience of a lot of the clients that I’ve spoken to about this type of abuse the abuser feels that they’re doing nothing wrong.

They feel completely justified in what they’re doing.

They feel like it’s completely okay to do this because they actually feel like they are above you in the circumstance.

So that is why it’s often a tactic or a symptom of narcissistic abuse because the person who does this that you don’t have enough value to feel like you’re sane.

All you are is an instrument to what they want to achieve.

So, the fact that you’re feeling all of these things, it’s literally nothing to them.

And I sit here and I laugh about what I’ve put up with from the past from this type of gaslighting abuse tactic but when you’re in it, when you’re experiencing it, it is so bewildering and…

It affects your ability to tell your story.

Because your story is effectively replaced by someone else’s story.

Someone else is manipulating your sense of reality, your perception of how you see the world to their own view to achieve their own aims. 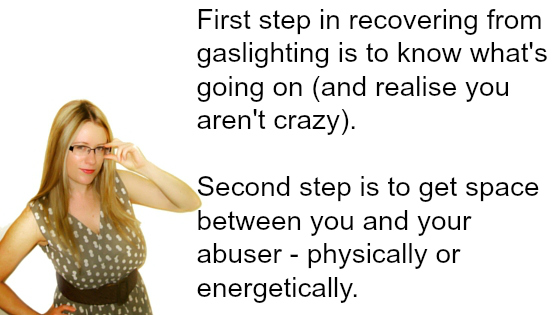 That’s why I created my Space Between Your Brain Cells meditation, which you can use when you’re feeling so caught up and so wound up and not sure where anyone is or what you’re thinking or what reality even is, what’s real and what’s not anymore.

Let’s put these narcissists back in their place because they have no business making you anxious anymore.  This life is yours!

Work with me and heal your anxiety! Click here to find out more.

Free anxiety energy healing meditations on MP3. Get them here.