How to stop looking at things as failures

You can learn to stop looking at things as failures – I’ll show you an amazing way to reframe negative thoughts to deal with failure and overcome fear.

Today, I want to talk to you about what you can do when your anxiety means that you can’t stop looking at things as failures. This process works whether you are concerned you’ll be a failure if you see a doctor about your anxiety, or if you feel like you just screw things up generally.

I’ve always been a perfectionist, I’ve always had issues where I pour my heart and soul into things and then when it doesn’t work out the way that I’d hoped, I whip myself. I flog myself over the fact that I failed and I give up and absolutely lose my bundle.

In my work as an energy healer, I do get people who come to me often and they are still carrying with them an energy pattern of something that they perceived as a failure from their past and it’s still sitting in them.

And things may arise in their life where they’re finding that they‘re repeating the same pattern again and again and again which leads to an outcome of what they perceive to be failure and they don’t know why this keeps happening again and again.

And it’s like they can see themselves doing it but from where they’re sitting, life keeps presenting these situations where they’re presented with the same opportunity again and again to apply this same pattern over and over and they keep getting the same outcome.

For example, they set a new years resolution but don’t know how to put structures in place to support new patterns, so they have no other choice but to switch to their default mode, which is that pattern of:

It can really lead to a lot of despair and unmotivation and just feeling really uninspired generally.

It can be a really hard thing to get out of.

So the thing to remember is when life presents you with this situation where you seem to be repeating the same pattern again and again, it is an opportunity for you to learn a new pattern, to decide in that moment to realize that the old pattern hasn’t worked and to try a new pattern, to try something different.

Now, that’s all well and good for me to sit here and say that to you but I can hear you saying, “Well, Eva, how do I make that happen?”

So I’ve got a three-step process that you can follow when trying to break that pattern of failure and trying something new.

I just want you, in your mind, to think of your most recent failure.

Now, I only want it to be the most recent one.

We’re not interested in dragging out the whole past and flogging ourselves over it all over again.

We’re already good at doing that. So we don’t need to go over all of our past failures.

Just the most recent one or the one that comes to your mind first.  It could be a really big one.

There could be a lot of emotion tied to it.  It could be something that’s not very pleasant to think about but stick with me because this really will work for you and this really will bring about changes in your life that will be beneficial for you.

So think of your most recent failure or think of the failure that first comes to mind.  Bring it up in your mind. 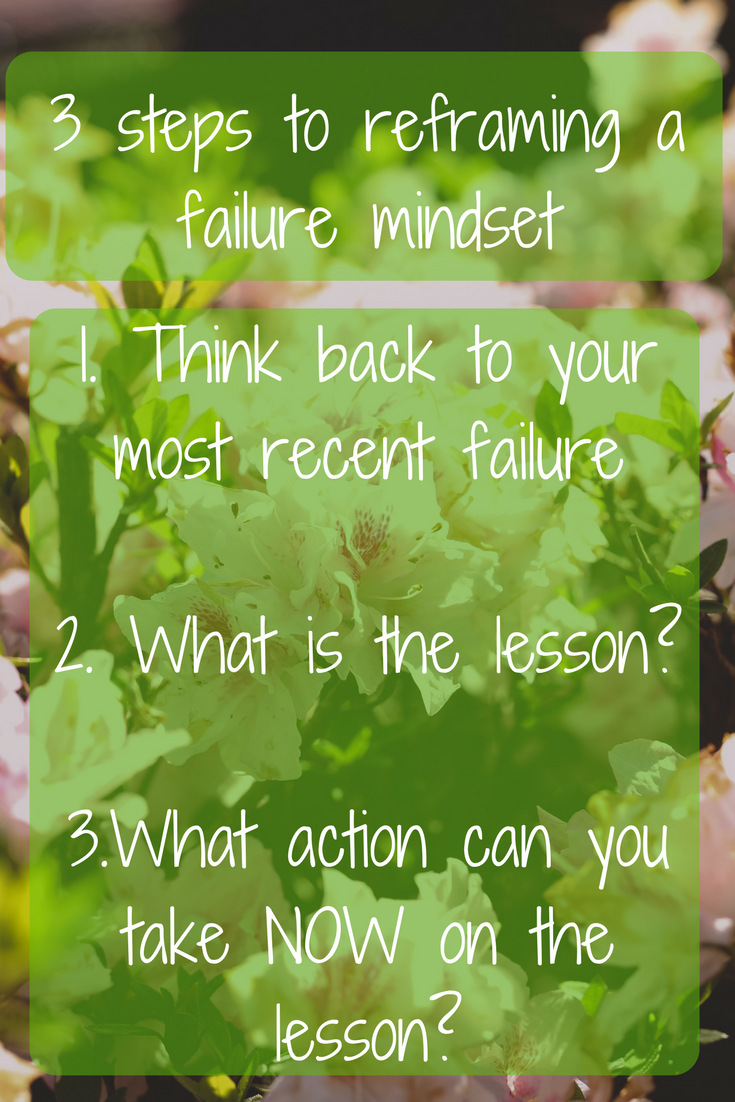 Now, with this most recent failure in your mind, I want to you to picture it.

It will being up feelings and it will bring up emotions and the second step is to just distance yourself from those emotions and to see, “Yes, this is objectively what I would call a failure.”

And looking objectively at the most recent failure or the failure that you’re thinking about, I want you to try and see what within that failure might be the lesson for you.

And again, this can be hard when your emotions are completely tied up in it and you’re seeing no way out of it.

Seeing the lesson can be a really, really hard thing but I do just ask you to stick with me.

I want you to see yourself in that moment and think what you might have done differently.

Where was the opportunity to do something differently?

What has come out of that failure that is a learning for you?

Now, a hint on that, it will be something positive and constructive.

“I will never learn this new skill again.”

“I will never try talking to that person again.”

It won’t be something about shrinking or shutting off or quitting.

“Next time I do that, I will try this differently.”

So just think – Without the emotion and looking at the failure objectively, where is the lesson in that to try and do something differently and it might only be a really little tweak.

It might be changing the tone of your voice when you try to speak to a person again or it might be using a different tool if you’re trying to, I don’t know, build a birdhouse or something.

I’m using really funny or simple examples but I’m sure you’ve got this failure in your mind and hopefully, by now, you’ve thought of where or how you could do something differently or what the lesson in that situation would be. So the third step is to just think about what action you would take to implement that lesson.

You don’t have to take the action right away.

This isn’t about immediately jumping back on the horse but it’s just getting your mind into a position where it could think about the idea of trying something different or new.

It might be something you could really easily and quickly take action on.

That’s not the point here.

And that’s all you need to do.

You’ve just taken yourself from a place where you’re feeling absolutely gutted over a perceived failure, you’re feeling completely emotional over it.

And you’ve taken yourself to a place where you can see a lesson and you’ve just outlined your first step in how you could move forward from that failure and what you would try again in the future to make things work out differently to perhaps have a different outcome.

And this is a really, really valuable thing that you can incorporate every single time your anxiety leads you down that track of feeling like, “I’m such a complete and utter miserable failure.”

Like I said, I’ve been there before, I absolutely know how it feels.

I have a background of anxiety and I still struggle with anxiety from time to time.

But every time I fail, I always manage to bring myself to a point where I can see what the lesson might be and I can identify what I can do differently.

And if you’re feeling like you absolutely can’t see anything that you would possibly do differently.

I do just ask you to sit with it, just sit with it a little longer and just look at it objectively, remove that emotion from it and I promise you…

I have a free guided meditation that will guide you through a process where you can bring more space between your brain cells so that you can separate yourself from the emotion of a perceived failure and really focus on how you can move forward, how you can focus on an action that you could do differently.