Can too much caffeine cause anxiety attacks?

Does caffeine cause anxiety attacks? Well… yes, if you’re drinking too much. Learn whether caffeine is fuelling your panic and what you can do about it.

Today, I want to talk to you about the difference between caffeine overload and panic attacks, and whether one can feed into the other.

Now, caffeine, as I’m sure you’re aware, is a stimulant.

It’s something that’s in a lot of soft drinks and pop, a lot of energy drinks have a very high amount of caffeine in them and coffee, of course.

Coffee is probably the number one source of caffeine that women in their 30s like me have in our lives.

If you’re anything like me, caffeine is the sort of thing where you kind of need it for that heart starter in the morning but if you have too much of it, if you have any more than one or two cups a day, then it can really wig you out and the effect that it can have on people can’t be understated.

Can caffeine cause anxiety attacks? Well… it can cause heart palpitations, it can cause jitteriness, it can cause quick breathing, sweats – it can make you feel very sweaty and very clammy as well and cause that hot/cold feeling as well.

It’s in no way comfortable.

And because it’s quite close to the symptoms of anxiety, sometimes, just having those symptoms themselves can be enough to tip you over into the realms of actually having a panic attack.

So, step one in getting on top of your caffeine / panic attack quandary is to just realize that there is this catch-22 where caffeine is what you need to get your started but on the other hand, it’s definitely what you don’t need because once you are started, it’s difficult to tell where you stop. This is important to note when asking does caffeine cause anxiety attacks.

This brings me to step two which is awareness of the fact that it is the caffeine that’s pushing you over the edge is really powerful.

Step 2: Be aware of the effect caffeine has on you –  ask “will caffeine cause anxiety attacks?”

Will one cup of caffeine cause anxiety attacks? Is it two cups? Certainly, any more than 8 cups a day, I think you’d agree, is way too much and puts you at risk of having blood pressure and hypertension as well as a range of other things.

Sleeplessness at night is one, definitely.

But having awareness of what your caffeine level is and understanding at what point will caffeine cause anxiety attacks, when do these panicky symptoms kick on after you’ve had too much caffeine, really will be useful for you.

This is where you have to kind of step up and decide what’s more important to you.

Is it having that extra kick of caffeine that maybe keeps you more focused and awake on the task more important to you?

Or is your ability to enjoy your day peacefully with minimal intrusion from panic more important to you?

Is it the taste? I really enjoy the taste of caffeine and coffee. I really love it when my husband makes me a cup of coffee in the morning.

It’s a really nice thing that he does for me and if he offers me more than one, I really like to have more than one, but I just have to say no because I know that any more than one coffee will just send me into anxiety overdrive.

I seem to be really, really sensitive to caffeine.

I really have to ask, will that extra cup of caffeine cause anxiety attacks, and is it worth it to me?

I suggest you do the same thing, just understand where your level is at and see what happens when you vary your caffeine intake a little bit.

Sometimes, people find that if they have a coffee after lunch, it can really impact their ability to sleep later that night.

Eight or nine hours later, the caffeine can still be affecting them and still preventing them from being able to go to sleep.

It can be a real intrusion into your life. 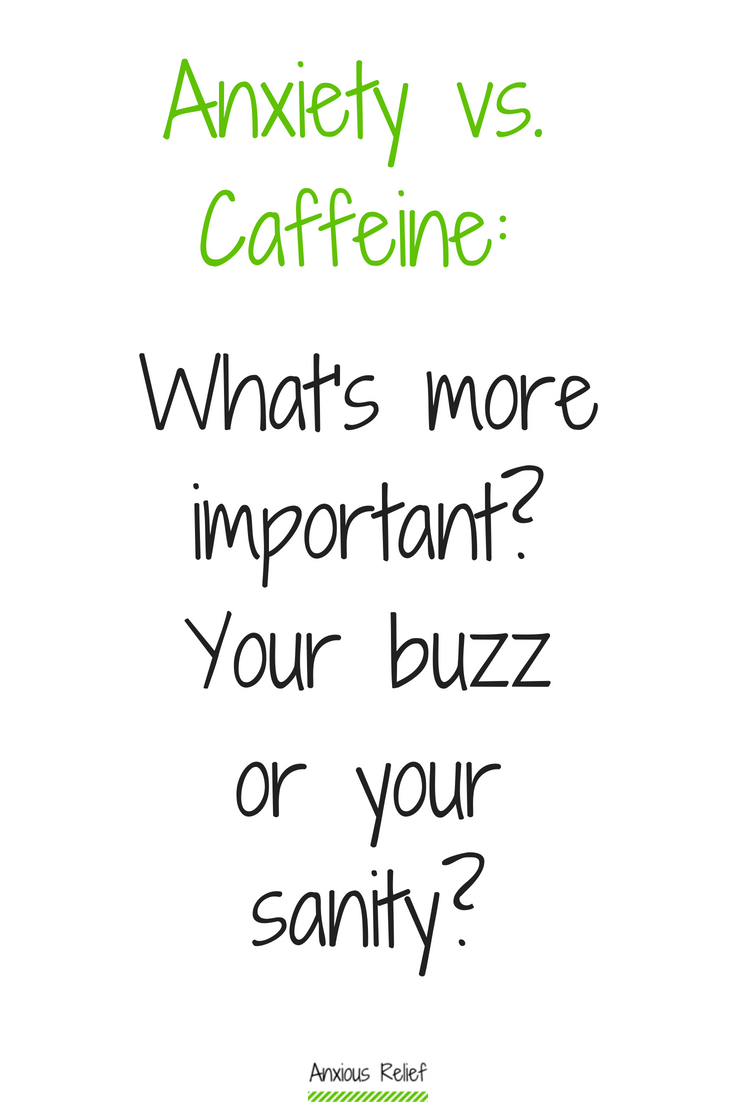 So, what you really do need to do is decide what’s more important to you.

Is it the coffee that’s more important or is it the ability to live a full and free and peaceful life, and then just taking the steps to reduce your caffeine intake.

Luckily, there are a lot of other options that are out there these days.

You don’t have to have a full caffeinated coffee. You can have decaf coffee or you have a hot chocolate or chai, you can have types of chai tea that don’t contain caffeine, you can even have a herbal tea.

And I know more than anyone that it can seem like it’s a really poor substitute when all you want is the caffeine and the kick that goes with it but in my case, for the sake of my peace of mind, I really had to just decide that it was one cup of coffee a day was all that I could really handle and anything else beyond that sends me unto really uncomfortable panic territory.

Deciding when and where you want to reduce your caffeine from is a really empowering step to take.

You can get withdrawal symptoms when you come off caffeine, you can get increased headaches, you can feel really tired, you can feel crabby and irritable but you will feel better in a week and you can certainly take short-term pain relief if that’s what helps you to reduce the caffeine in your life and therefore reduce the panic in your life and just help you feel a bit calmer and on track in your daily life.

Just don’t lose track of the long term goal which is to live a happy and harmonious life, free from the intrusion of panic attacks so I really do urge you to take control of your caffeine intake if you find that it is impacting your ability to live a peaceful life and is giving you panic attacks.

The other thing, if you are having a panic attack, I have created a free panic self help meditation which is designed for you to listen to during the panic attack and it guides you on a count from 20 down to 1 and during that time, your panic symptoms lessen and by the time you get to 1, your panic attack is over with.

It’s really useful and helpful to just get on top of your panic when you find that you’ve maybe overdone it on the caffeine and you do find yourself caught in that moment. It’s a good way to just get a handle on the symptoms as they’re happening.

Go forth, think about your caffeine and its impact that it has on your life and decide whether it might be worth reducing your caffeine intake.