How to calm down during an anxiety attack

Learn how to calm down during an anxiety attack – I will share some great quick stress relief techniques that will help you handle a panic attack when it strikes – even if anxiety strikes for no reason.

If you’re having a panic attack right now, right this very second, the very best thing for you to do is to download my free panic self help meditation. This a guided visualization which you can download and it takes about a minute to listen to and I actually talk you through and talk you out of the panic attack.  So if you’re panicking right now, just stop reading and go download that and listen to it right away.

So, panic attacks, as you may or may not be aware, are due to your body’s overblown reaction to fear stimulus.

If you want to learn how to calm down during an anxiety attack, it’s important that you understand this.

Many panic attacks come on without any warning and triggered subconsciously and that’s what makes them particularly terrifying.

So, a couple of things about panic attacks:

The key to beating panic attacks is knowledge: knowing what causes them and knowing what you can do about them which is the reason why I’m doing this blog for you today.

That’s usually what people who are panicking are going through.

Realizing that it’s a panic attack really is the first step to bringing yourself out of it and regaining your power from the panic.

Most often, people say to me when they know that they are having a panic attack, their first thought is, “I’m dying.”

Then there’s this little voice that comes up in the back of their head or maybe someone says it to them, “Are you having a panic attack?”

If you’ve had a panic attack before, you normally can kind of reference against how you felt previously in the past.

Although it doesn’t make you feel any bother, what that can do is give you the knowledge that you are having a panic attack.

If you’ve never had a panic attack before, you might need someone else to tell you.

A lot of people end up at the emergency room with their first ever panic attack.

So, realizing and understanding and getting that knowledge that this is a panic attack is super helpful to calm down during an anxiety attack.  Not because it makes you feel better at the moment but because it gives you knowledge in the longer term and knowledge is power. 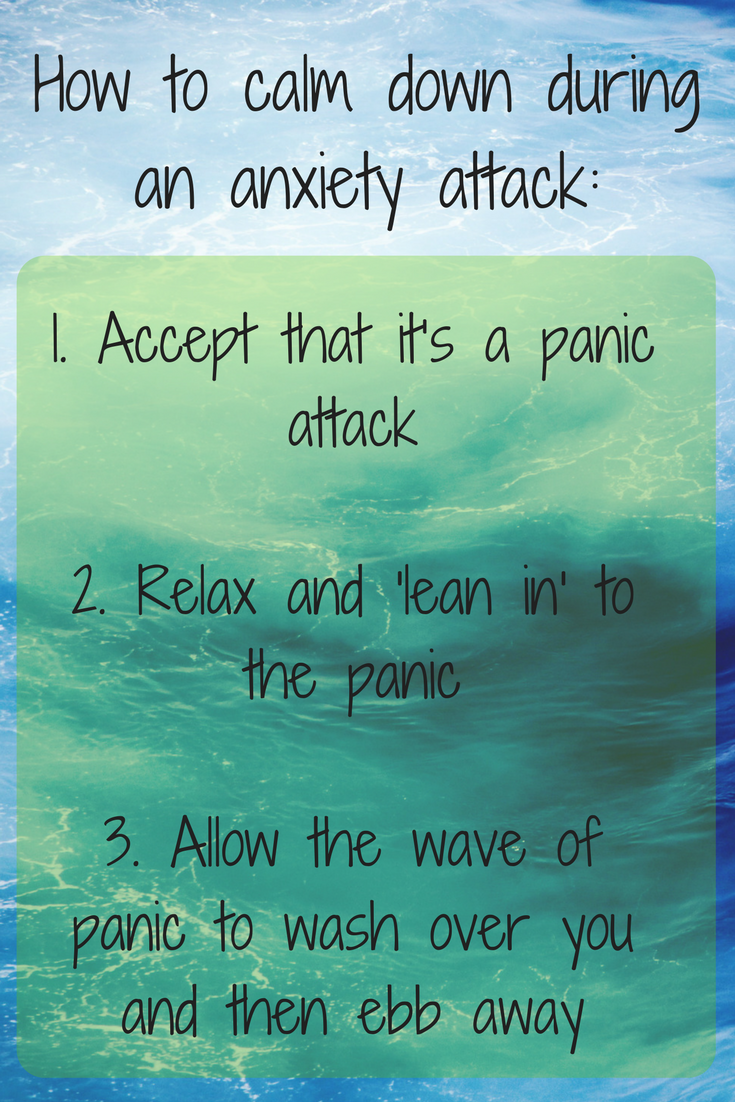 Step 2: Relax and lean in to the panic.

This step seems like a massive ask but I only recommend it because I absolutely know as an energy healer, as a reiki therapist and as someone who has experienced panic attacks in the past, this step is absolutely crucial to calm down during an anxiety attack.

I’m going to ask you to relax in the face of panic.

It’s going to go against every single bodily reaction that you’re going to have.

So you’re in this massive overblown fear reaction, your shoulders are up, you’re not breathing right, your heart is beating out of your chest and I’m going to ask you to consciously relax your shoulders.

Consciously relax into the feeling of your heart beating out of control.

Accept it, allow it.

“Yes, my heart is beating out of control out of my chest in this moment. Yes, I am having trouble breathing.” Relax and accept into that.

“This is a panic attack.  I know what it is.  I feel like I’m out of control,” but just accepting and relaxing and kind of leaning into those feelings a bit instead of trying to resist them and run away from them because resistance is what fuels anxiety.  Absolutely, 100%.

Step 3: Allow the wave of panic to wash over you

Then, while you’re in that phase of surrender, you allow the panic to wash over you.

I know it’s super scary but you just stay with me, you just let it wash over you, let it do its worst, let it completely take over.

Allow that to happen, just go into it.

The panic attack will come up to a climax and then it will ebb away.

That’s how it works, they come in waves.  The wave will crash over you and then the wave will die down.

So, just by just relaxing and leaning into it and letting that panic wash over you, you’re removing the resistance and the resistance is what fuels the anxiety.

So relax, lean in, and let the panic wash over you. I do know it’s hard.

The third step is, again, this is linked to knowledge is power but removing the fear is the key to calm down during an anxiety attack. It’s absolutely crucial. It’s the process that I’ve used myself personally to get rid of panic attacks in my life and they no longer rule me, they no longer have any power over me whatsoever.

So, download my free panic self help meditation for the next time you have a panic attack and then when that panic comes on, listen to that guided meditation and follow the steps and I will walk you out of the panic attack.